Belinda has Roger by the balls. She pushes him into the corner and asks him why he didn\’t return the movies. He said he had was going to do it, but ran out of time. She starts slapping him over and over in the face. Roger wants her to stop, but she wants to punish him. She tells him she could hurt him a lot worse, and grabs him by the balls to remind him of what she could be doing. She continues slapping him in the face and Roger tells her he\’ll go return the movies immediately. She grabs him by the balls again to make sure he knows what he needs to do. She finally lets Roger go with his face stinging from all the slaps and his balls aching from all the squeezes. 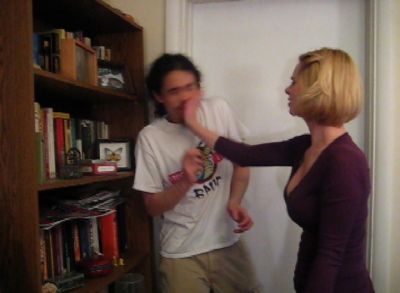 Get the clip now!