I have found balloons again and as usual I don’t miss the chance to play with them, to make them squeak and burst. Does that excite you? You get turned on by that? Kind of pathetic, don’t you think?

do you also love to play with air balloons .. inflating them and making them burst … I think it’s just awesome

The girl lays down a balloon on a chair, sits on it until it bursts! blows up 10 balloons! 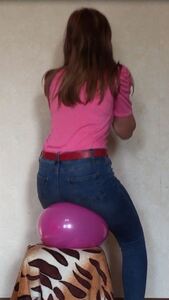 A model dressed in tight leggings sits backwards on large balls and jumps on them until they burst! 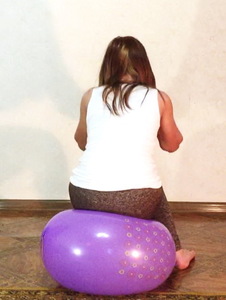 Bet your balloons will run out of air very quickly when I start playing with them? You wanted black because they should be particularly resistant, so I inflate them one by one to really crush them barefoot! It squeaks and hisses, it pops and flies under my beautiful feet. Sometimes you lie on the floor, sometimes you watch the crushing from above. And I’m always so forbidden naughty and sexy in my rockabilly dress and hot tattoos!

Nastya is sitting with a glass at the table. She gets up and walks over to the foot pump to which the balloon is tied. She steps on the foot pump and the balloon inflates. Nastya is making great efforts. When the pop happened, the girl fell on the bed, then she collected and examined the pieces of the balloon.Contact me foxnastyaa dog gmail and com

Nastya in latex pants is jumping on a red balloon. She has a red balloon in her mouth, which she tries to inflate. She jumps with all her might in a red balloon, her hair flying in different directions. She will achieve her goal, blow up both balloons. Her mouth and ass will help her in this. Pieces of the balloon will fly around the room. The pieces of the balloon are wet with her saliva.Contact me foxnastyaa dog gmail and com

Do you know what this beauty loves to do? Yes, yes, she loves to pop balloons. She deftly catches balloons and puts her shiny ass on them, presses her breasts, sticks her nails into them, presses with her feet. Her reaction to cotton is amazing. Happy viewing. 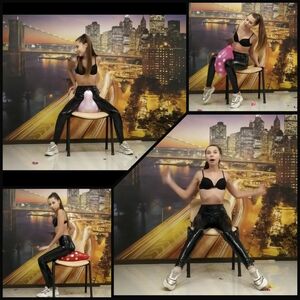 Dr Martens crush ballI’m in love with my new Dr Martens with the great platform sole, the boots are so beautiful!I have 2 balls to play with them, oops, I don’t feel anything under this great sole, seems to have burst,how do you like this Dr Martens, please feedback

I inflate the ball very strongly with the compressor, for this I use my feet and operate the switch, my foot has full control, what happens …

Go to Store “STUDENTS OF REELL”

Look at all these cute balloons. I know you love watching how i make them blow up with my thick booty, my leather boots, my hands…i know it turns you on so much hearing the sound they make.

Lady B crushes plastic cups under her wedges.

Lady B crushes many big Balloons under her sweet ankle Wellies.

Finally, here it is, my new balloon fetish clip. As a looner you have waited impatiently to consume this clip. I am a heartbreaker … and today I’m going to blow up some balloon hearts. PENG